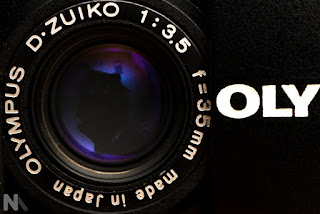 Okay I promise to stop numbering my films, but since the first one was destroyed and I really wanted to show my "first film", I had to do "second". "Third" is because it makes historical sense.

Like I said before, I've been drooling over the idea of shooting film for a while, and this is my third attempt in 35mm format. This time, a pocket camera.

When I was young, we only had film cameras, and the one I used most was one of those long bar cameras that look like a Kodak 600 (I think we had a different brand), which took 110 film. That's what I shot, and I always shot it without even a viewfinder because the camera we had did not have any glass in the viewfinder tunnel, so it was unreliable for directing your taking lens. My sisters had 35mm pocket cameras but I was never allowed to use those.

Now I finally decided to get my own 35mm pocket camera, and after lots of research, the final choice was the Olympus XA2. 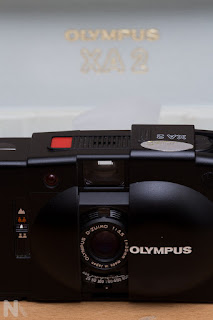 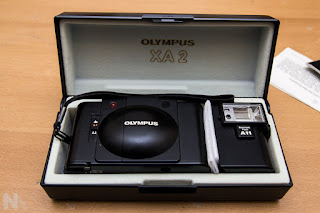 I needed the camera that had following qualities:
- The main criterion has been good optics.
- Also it needed to be as cheap as possible.
- Being small is a desirable feature. It may accompany a DSLR so it cant be bulky.

I thought about using rangefinders and I still am considering the idea but I've had my fill for now until the upcoming urge of GAS, I will be fine. The size of a rangefinder is still big enough to think of it as a main camera, not a sidekick. 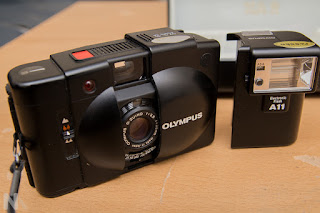 The Olympus XA2 has a 35mm f3.5 D.ZUIKO. I actually thought it was an f2.8 lens which is why I was slightly disappointed, but samples from the internet still show that it's a pretty good lens with regard to sharpness and coverage (little or no vingetting and little or no blur around the edges as far as I could see). You can see that it is a coated lens by looking at light reflections in it. It doesn't seem like the rear end of the lens is as well coated, though.

The camera is pretty small for a 35mm, feels really compact and actually fits into a pocket. Depending on the size of your pocket and other relevant sizes you may or may not forget that it is there. Build quality is pretty good. It feels much sturdier than any other cheap compact 35mm camera that I have put my hands on. If you're a fan of build quality you won't be disappointed.

So I've loaded my film in it, which is the Kodak 400 TMAX. Same as what I put into the Canon EOS 600, simply because it's the only black and white film that I have left. If I had a different BW film, I would have used that. By the time I put the film in this camera, I hadn't even finished shooting the one in the Canon.

Getting an extra exposure on this camera seems like an easy thing. Loading is straightforward, and because the body is so small, you don't have to pull the film a lot out of its canister. This may give you an extra exposure or two, but I'll find out when the roll is finished.

The shutter release is really light, and just as they say, this camera is pretty quiet. I'm used to pressing buttons, and here you don't. Olympus brags about the 'feather' touch, and indeed it is pretty light, which simply releases the leaf shutter/aperture thingie which barely makes a slight click sound, and that's all you hear. Then you advance the film with the advance gear, making a little gear-clicking noise, and you're ready for the next shot. The gear in question is actually not plastic and this is why it does not hurt your thumb. I think it is some kind of hard rubber.

You obviously cannot multi-expose on this camera. Unless you're pretty good at math perhaps, then maybe you can click the lower film-rewind button, rewind manually by two frames, advance again by one frame, and you're back on your last frame with the shutter cocked. This is all theoretical because you can't "rewind by two frames" since the spool inside the film cartridge may not necessarily be taught enough to warrant that the film is indeed rewinding as much as you think it is, let alone the difference in diameter between the two spools (film cartridge and taking spool) which changes with ever frame. 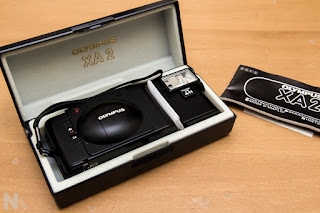 The body feels really nice and I read on an Olympus XA fan site that a special finish is applied to give it its stone-like finish. It is sturdy yet has some plastic parts which you will not mind. There is, however, one design flaw: there is no window in the back to see whether you have a film in the camera or not, and if you do, you cannot tell which one. This could be remedied by either sticking a film badge, using a post-it note or similar, on the uniform-black back, but it removes the nice classic tidy look of the camera. The only other option is having a really good memory and intending to actually finish your roll and not leave it in a drawer for a long time until you forget what was actually in the camera.

While this camera has a variable shutter speed between 1/750 and 2 seconds, which is selected automatically by the camera's internal meter, I found it difficult to shoot in low light despite using an ISO400 film. When there isn't enough light, a green LED lights in the viewfinder and the shutter will not release. This is a form of protection against under-exposed images, but it annoyed me lots as I found it impossible to take a photo indoors. The only option is to attach the flash, which nobody likes.

One thing to tell about the shooting experience with this camera though is that it is extremely easy to forget to set your focus zone before you take the shot. Unlike the XA, the XA2 is not a range-finder. You do not see your focus in the viewfinder. Instead you choose one of three zones to focus on. The f3.5 aperture makes it easier to define user-friendly zones than an f2.8 would, and the lens does not focus close enough anyway to make that significant. The closes focusing distance is 1.3 meters, and at a focal length of 35mm, you can take portraits or bust photos from that distance. A bit farther is the default option, at which you can fill the frame with the whole length of a person. Everything beyond that is infinity. I think I will use the third option most of the time, but you need to set your camera to your required focus zone every time you open up the cover. Closing the cover resets the focus zone to the middle one. 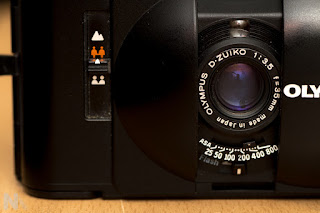 zone focus selector to the left. Cover slides in the track seen on the bottom. Inside, it pushes a mechanical part which resets the zone focus as it closes.

Another minor drawback is that the viewfinder's frame is sometimes hard to see. Should it matter? It helps compose for horizontal and vertical lines so I want to see my rectangle around my shot. It is only at some angles and in some lighting conditions that you can find it difficult to see that frame inside the viewfinder.

Pros:
really pocketable. fits into my jeans pocket despite being bubbly compared to modern cameras.
Good build quality is an obvious one.
Really quick camera: just open it up, set your focus zone, snap.
Really quiet: no sound except when you advance your film.
Lens quality is renowned for being good but I am yet to develop my film and see for myself. I want to see sharpness and no vignetting.

and then of course there is the top pro point: shooting experience.

What I want to say here really applies to shooting film in general, but this camera (and perhaps most pocketable quick film snappers) really brings back the subtlety of photography while experiencing the photographed object.

This is something you do not get when you shoot digital. Whenever you shoot a digital shot, you want to look immediately at your small LCD screen to judge the photo. You want to decide whether it's good enough a memento to be taken from the time you experienced the object, or whether you need to take again. On the one hand, you have the facility to judge at the very moment; on the other, a retake is free.

It is like you want to try out the memory before you save it. You are standing there experiencing a memory, and you forget the object even before you remember it. You only virtually experience things with digital cameras, collecting snaps as you go and only experiencing the object later as you look at your photos and try to remember what the experience may have felt like. The object is experienced in retrospective to the photos.

With film you snap the shot and your eyes stay on the object. You photograph that portion of nature, or the crowd on a busy train, and you remain in the middle of it, with plenty of time to absorb the situation into yourself. The photo is preserved in the black box of memories, and your presence is preserved in the situation. You stay in the real world, and you live the thing, the experience which is not photographic. When later developing the photos, without the choice of going back in time to choose a 'better' representation of your visual taste, the lived experience is lived again as the photographs here function as reminders of what you lived when taking them. The photos are retrospective of a lived experience.

This is what I felt and thought when shooting film, slightly on the EOS 600, and more so on this automatic tiny pocket camera. It emphasises your presence with its small size and unobtrusive design. You can forget it exists, and when it does, it is not that significant. It does not stand in between you and the experience, and once it does its job, it is immediately forgotten back into your pocket or hanging on its strap. A digital camera becomes its own object which uses the rest of the world so you can experience it, and only it.