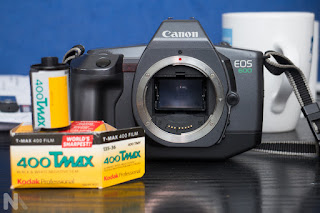 As I said in the previous post, my first film ever was lost to bad chemicals. A second attempt was therefore due.

Along with the joblot which said bad chemicals were part of, two Kodak 400TMAX films were included. Outdated, but when was that a problem in black and white?

However, due to the frustration I had with the first film, I really wanted a quicker shooting experience this time. Also, logging the heavy AE-1 with me with its proprietary FD lenses was a bit of a limitation, albeit a good experience that I intend to go through again.

Therefore, for my second film, I decided to use an EOS system, which would enable me to use the same lenses I use on my DSLR. On the one had, I can take both my digital and film cameras out with me, with a single set of lenses for both. Also, I have a bigger variety of lenses for this system.


After selling my first EOS 300, BP-200 and silver EF 28-90mm outfit which I thought looked pretty handsome and was in superb shape, due to lack of use (like, never), I decided to re-acquire the same outfit because it is the cheapest EOS SLR you can have nowadays with an option to use AA batteries. The body can easily be had for £3 on eBay if it auctions locally. Add postage or wait for a local one to appear. The battery grip averages between £15-25 when sold on its own, and if bid on by collectors perhaps. I was lucky to buy both for £5.5 locally. The other reason for this choice because it is also extremely light weight. One wouldn't even notice it's there in the bag.

Lightweight that you can barely notice it, operates the same EF glass, and cheap enough not to worry about any damage while shooting 35mm (full frame/double frame, up to you) format... ace!

The EOS 600 was one of those cameras one saw on eBay, often around £8, and would never buy. I heard good stuff about it, like how it's a pro camera. It still doesn't appeal much, does it? It's an ugly gray camera. I didn't want to pay more than a tenner for one if you include postage. But then I found this EOS 600 film SLR camera in a car-boot sale and couldn't resist at £1.22. It was sitting among a set of metallic classic SLR cameras that were generally in bad shape and were all being sold for parts at £2 each. All the other SLR's had really dirty mirrors, focusing screens, viewfinders, bodies, etc. They were pretty tatty. But this exception looked pretty good and very clean, but no battery to test it. The Canon EOS 600 takes one 2CR5 6V battery, which I borrowed from my Canon ST-E2, and indeed, the camera worked like a charm. 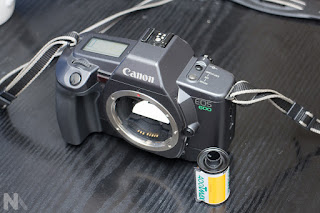 Cons and Pros of each in comparison to the other

EOS 600
+ Build quality
+ Focusing speed and accuracy
+ Higher frame rate in continuous mode.
+ Interchangeable focusing screens, which is a sign of a higher-end camera, such as in case you're using a very fast f1.4 lens and want an S focusing screen to keep up.

The rest of the specs are pretty much the same.

= both weigh about the same when 300 is combined with BP-200 and 4xAA batteries
= both have same maximum and minimum shutter speed. You're not going faster than 1/2000s with any of the two.
= both operate EF lenses and Canon speedlites (I think? Something about EZ and EX series needs to be clarified here. EZ Speedlites do A-TTL metering with film SLR's. EX series goes with digital. Digital EOS cannot A-TTL, but I'm not sure about the EX Speedlite being backwards compatible. It might be that these would work in manual mode only on a film EOS.)
= both take pictures

To my surprise, the EOS 600 was pretty heavy for an electronic SLR. However, I found that, combined with the grip and 4xAA batteries, the EOS 300 weighed about the same. The build quality of the 600 makes the 300 feel closer to being a toy. The thing feels like a tiny tank in your hand, and sure enough it is kind of designed to look like one. It is ugly. The mechanics feel a lot more solid, though, and the shutter-mirror movement is firm and feels much more sturdy than in the 300. The reason why, I think, can be seen if you compare the burst mode of the two cameras:

I've also compared the autofocusing speed, and it the 600 wins hands down. Fast and accurate with all my lenses.

Nothing is perfect, though, and the 600 seems to have a single point at the very centre of the frame for autofocusing, and I suspect metering as well, as opposed to the competitor's multiple focusing points which can make framing and focusing a tiny bit easier in some situations.

The controls are worlds apart and this is where the two systems really feel like two different categories of products.

The EOS 300 is pretty straight forward. A button does what it says it does. You use the Fn button to select one of four functions which you can see in the LCD, and turn that on or off with the dial.

The EOS 600 is a bit of a hassle and takes a bit of getting used to. A button does what it says it does, and does something else when combined with another button. This style of user interface has been passed down to the EOS 1D series.


Another feature which is passed down to to the EOS 1D series is a little lever/switch which is hidden under the EF mount. When a lens is fully mounted until it clicks, the lever is engaged. This is when the EOS system expects communication with an EF lens, and when it does not find one, it gives an error. This gives trouble when using an M42 lens or a reversing ring, as these adapters do not have an AF-confirm chip. The only solution is to shave the adapter so it leaves that lever alone when it fully clicks in place. The other solution of course is to shave the lever but I presume it is safe to think nobody sees this as a solution to a problem. The 300, and pretty much every other EOS camera that I came across, lack this lever/switch thing and therefore naturally allow the use of any adapted lenses.


Ultimately I went with the EOS 600 as it ended up being the smaller of the two outfits, while also feeling like a building block in your hand which I personally like.

And now the film is developed. Photos will be shared once I find a way to print or scan them.