Recently I've acquired two lovely 35mm cameras with a couple nice lenses: the Canon A1 and AE-1 Program, with an FD 50mm f1.4 and an FD 35-105mm. An old film in a drawer would do the job: Ilford FP4+. I really like the idea of low ASA, low noise, and this was the only black and white film that I owned. 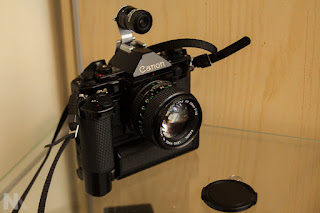 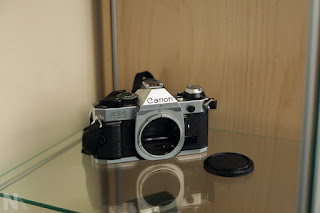 My plan was to use one camera for colour film, the other for black and white, but there was no room to develop colour yet so I had to make a choice of which camera, and for my sole Ilford FP4+, which came with God knows which kit I bought a year ago, I chose the sexier looking AE-1 Program with its nice big time dial. I like the simpler interface of the AE-1 Program.

The kit I put together consisted of the camera body, both lenses mentioned above along with a x2 type A teleconverter, a flashgun and a light meter. I prepped the 50mm with two filters for BW: a polarizer to eliminate reflections in some of my planned shots, and a red filter for extra contrast in some situations. There was also a macro bellows which I never used. 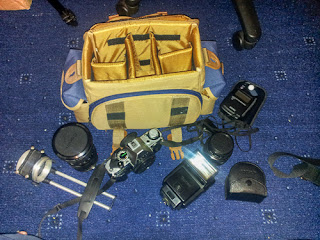 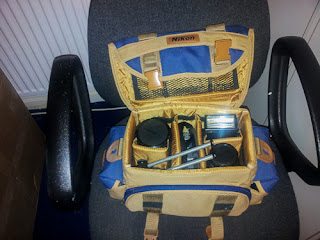 The journey shooting all 24 exposures was a very fun one. I used the light meter in every one of the shots, and used a digital camera to meter for flash in some of them. 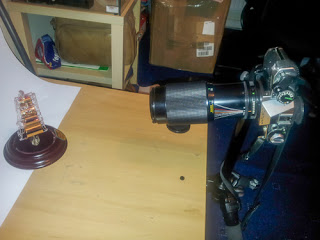 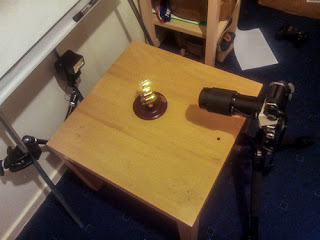 In this shot taken at home, I used the Canon FD 70-210mm lens to frame the ship in macro mode at 70mm

In order to learn from my experience I decided to keep a record of every single shot I take, all the settings that I use, so that when I develop the film later, if I have over or under exposed images, I would know what went wrong.

The few shots were recorded on a piece of paper then I began using Evernote on my Android phone. It was a good idea since my phone is always with me, and anything written in Evernote automatically gets synced to my PC. Then, by mere coincidence, I stumbled across this amazing application which is godsend for film shooters. It is called EXIF4Film.

EXIF4Film creates and organises all rolls you are shooting. You create a list of your gear, enter all the details, and fill in every detail for every shot you take in a very nice and user-friendly interface. There is even a setting for GPS location and a complementary picture you can take to help you remember anything you want to.

You can also export XML lists of your gear and film rolls, in case you want to migrate the info into other software, or to save in case your phone crashes and needs a hard reset.

I cannot describe my excitement to get those frames out. I know very well I took some really nice shots, some of them very carefully constructed. Then came developing time.

Upon developing the film, it came out blank.

A little troubleshooting and I realised the fault was in the developer solution. The guy who sold me the joblot gave me completely oxidised developer. Needless to say, he stopped responding afterwards.


My first roll of black and white film ever was gone into oblivion. Literally went down the drain as every tiny bit of silver halide crystals washed away without leaving its mark on the film plane, leaving behind a mere transparency, showing no memory except for the nothingness I felt when I took the film out of the developing spool.

And that was my first roll of film. I will not deny having learned a few things out of it, including getting used to some exposure settings in certain lighting conditions. You do not learn to keep those in mind when using digital because of the sense of security you get for using EXIF data in every shot. You tell yourself you will look at them later, but you never do.