Was thinking, while this blog is on, why don't I share my photography as well? :)

Here are a couple frames from a Fujifilm NPS 160 expired 120 film roll shot in a Fujifilm GX680 II. That is 6x8cm for each negative. That is a whole lot of image real estate.

Both of these shots are taken in my front garden. Fortunately that won't reveal my address to you. ;)

This first shot is of a single white-ish daffodil that bloomed this year in my front garden. The only one this year, something positive perhaps, taken with a Fujinon EBC 100mm f4 at near-macro level. I used the macro extension rails and long bellows of course. 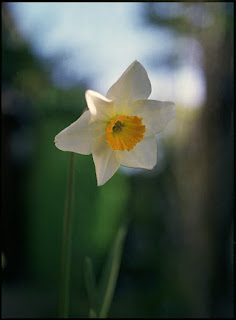 The following shot was taken with a much wider 65mm f5.6. Remember, at 6x8cm, 65mm is pretty wide. This decoration lantern that won't turn on can potentially mean so many things for me, not all of them positive which goes well with the lantern's incapacity for giving out any light. 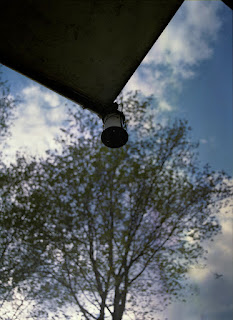 
Two images that, in the context of their making, despite the simplicity of their content, can mean a lot. Does the blooming of the daffodil stand as the stubborn persistence of life to grow where the forces seem to be against, as the breakthrough of possibility despite the paralysing circumstances that surround it, or does its singularity reveal the lack of fertility in the carer's home and his incapability of providing what it would have taken for the rest of the bulbs to grow? Does the lantern incapable of giving any light reflect what I feel about my journey as a PhD student stuck in a rut and incapable of either production of getting out of what seems like an impossible situation? Or does the sheer symbolism of the object reflect what is actually happening behind the door it decorates? Will the lantern actually give out anything any time soon? Two simple images that I am struggling to read.