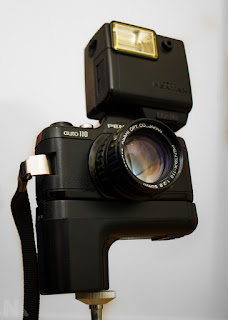 The Pentax 110 SLR system is the smallest SLR camera with interchangeable lenses in camera history. It comes with great little lenses. They are extremely lightweight, very good quality, fast fixed aperture of f2.8 throughout the system, and they have some of the best focal lenghes you'll ever use. The list comprises of 18mm, 24mm, 50mm, 70mm and a zoom 20-40mm. To make things even more versatile, the system has a very tiny teleconverter which I am yet to obtain. Needless to say, Pentax always does a great job at small lenses. The legendary Pentax 40mm f2.8 K-mount pancake lens speaks for them.

Unfortunately, the Pentax 110 uses 110 film cartridges which are out of production and are hard to obtain. They would also be costly to buy even if third party manufacturers produce them. However, the advent of mirrorless cameras and m4/3 systems gave a new life to these little wonders. Adapters are now widely available that enable you to use these on a Micro Four Thirds system and cost something like £10-14 at the time of this post. Of course, at that price they do not come with an aperture diaphragm. 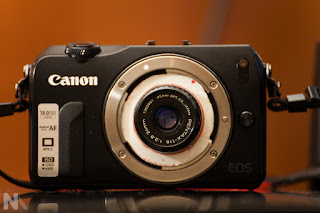 What I found is that the image circle produced by these lenses can actually cover the bigger APS-C sensor of my Canon EOS-M camera. As of the time of writing this post, I have never seen a Pentax 110 to EOS-M adapter for some reason, even though there is one for the Sony NEX, which is also APS-C sized.

For now, let me share by brilliant cheap adapter that allows you to use your Penatax 110 lenses on your Canon EOS-M at their full f2.8 aperture (yes that last phrase is important). What you need is the following (cheapest version. Other materials such as plastic can be used instead of cardboard).

- Your favourite soda/pop/fizzy drink's large size bottle CAP. Yes the cap only.
- Thin, single layer, cardboard: widely available in the form of facial tissue boxes or Paracetamol boxes if you take as much as I do. The thicker the better but has to be single layered. Cardboard from large brown boxes is not good.
- Sharp utility knife or dremmel tool, whichever you have or prefer, to cut a precise hole in the bottle cap.
- PVA glue or similar.
- A Pentax 110 lens such as the tiny 24mm f2.8. I prefer going with this one because it has the closest focusing distance (35cm), making focus calibration easiest.

Start by cutting a hole in the bottle cap the size of the inner circle of the lens rear mount.
And then cut a notch the size of the smaller one of the two "wings" on the lenses rear mount. You should be able to clip the lens in place and turn it a little bit to secure it in place. 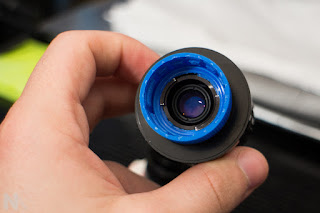 Now to make the part that's going into the camera mount, take two measurements: the wide circle behind the mount's own "wings", and the small circle formed by those wings. Basically replicate the shape of the mount on cardboard. Cut a few layers of identical cardboard. Glue them together to make one thick mount. This layering and glueing enables the resulting mount to be sturdy enough to carry the light Pentax lenses. You could use plastic it's up to you but keep in mind that plastic is not %100 opaque. You should paint/tape/cover it somehow as to make a completely light tight surface. Cardboard is opaque.
Because of the nature of cardboard, using it as it is will lead to deterioration in the edges, so better use some PVA glue around the edges and/or some tape to function as a non-scratching film covering that keeps things in place. Remember that this is going behind the camera mount, so lots of friction.
Cut a hole in the middle the size of your bottle cap and only slightly smaller.
Push the cap until it's tight. You should have only 1mm of bottle cap still protruding behind but that really should depend on the depth of the cap you're using. Don't use very shallow ones as we'll still need some depth to the front to get the right focusing distance.
If you need to add thickness to the bottle cap to it holds fast in place (preferrable) use a layer of duct or electrical insulating tape. Black looks good. 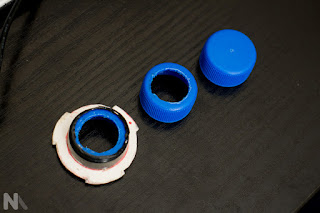 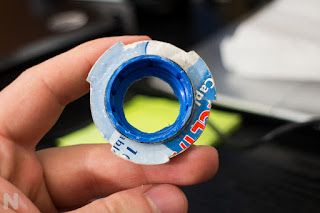 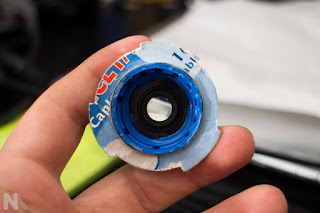 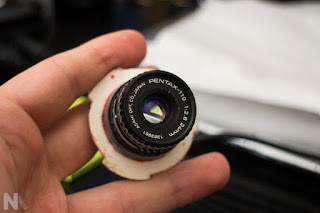 - I will assume you are using the most available of all lenses, the 24mm f2.8, with its closest focusing distance of 35cm. Get a 35cm ruler or anything to mark that distance very clearly on a flat surface such as a table.
- Align your camera's sensor (you should see the sensor marker on the top of the camera body. It looks like a circle with a line going through) with the Zero on your ruler. Mount the lens and DIY adapter and turn the lens to focus for 35cm.
- Look through your LCD, use centre magnification, and slide the bottle cap in or out all so very minutely until you see the 35cm mark is precisely in focus.
- Remove the mount from the camera body without losing that precise placement and flood the gap between the cap and cardboard mount with PVA or similar glue.
- When it's dried, you're done. You have the cheapest DIY Pentax 110 to Canon EOS-M man could ever produce. 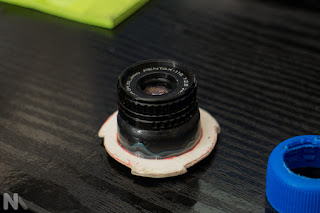 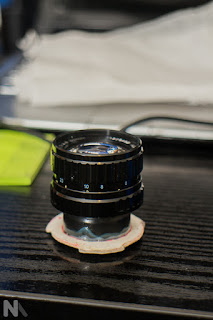 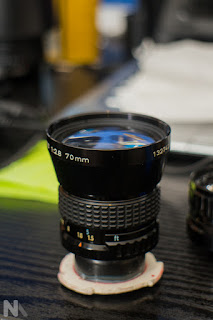 Claimer: variants made for other mirrorless cameras are still to be credited to me. :D

Now why would you make this kind of adapter?
While I could find a commercial adapter for the similarly sized Sony NEX sensor, an EOS-M one was nowhere to be found. Both of these sensors, however, are bigger than intended with these lenses. This should mean vignetting is easy to have. In fact, I've been trying to make my own adapter using the original mount from a Pentax 110 Auto body that is broken. I kept the whole mechanism in order to use the camera's own aperture mechanism in my adapter. Brilliant, isn't it? Well, one little problem. Apparently using the Pentax 110 as its own adapter leaves behind a much smaller image circle. Even Hin Man seems to have lots of vignetting with his camera for some reason. My cheap adapter allows the whole sensor to be covered and only negligible (or easily corrected unless desired) vignetting is produced in the final image.

Here are some sample shots. All three shots have been taken with an EOS-M in P mode at ISO 200 with the aid of a remote flash diffused towards the ceiling. I suppose the shutter time has therefore been locked to 1/60s. All photos have been taken in RAW and exported to JPG immediately without a single edit. Lightroom simply shrinks the image and adds my logo in the corner.


As you can see, vignetting is slightly apparent in the 24mm. It is easily corrected in Lightroom unless you want it. It actually gives a nice vintage effect to video. The 50mm is probably the best at coverage, and 70mm is perhaps the worst. The sharpness is impressive too. I think all of these shots have been taken at each lens's respective closest focusing distance, which is 35cm, 90cm, and 150cm respectively.

This is very little vignetting compared to Hin Man's who's got a constant large vignette on all his images which was not even centred! A dark halo covering the bottom third of the horizontal frame is what he always got. I think he was using a NEX. This adapter seems to allow greater coverage as the kind of vignette you see in the sample shots is what I always get no matter what lighting conditions I shoot in.

Stopping the lens down is possible by creating a smaller aperture ring and throwing it inside the bottle cap. I haven't tried that but I'm still trying to make that original body mount into an adapter in order to use the original aperture mechanism designed with these lenses. Another plan has been to 3D print this but, well, I do not have access to a 3D printer so if you have one let me know. 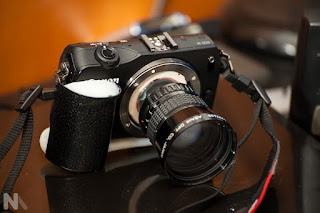 Please do not use parts of this post or link directly to the images in it. Also it is not allowed that you upload these any of these images on your own server or use directly in your page without reference. Link to this whole page if necessary.

Share your thoughts and please credit me if used.