I've almost got a complete set of these beautiful lenses (still missing 18mm, the zoom lens and the teleconverter), but the 70mm arrived with some drops of what looks like oil on the inside of the rear element, and I couldn't, for the life of me, figure out how to disassemble it for cleaning. Not only the rear mount has no screws but also no notches to span the holding ring out of place.

Here is the lens in question: 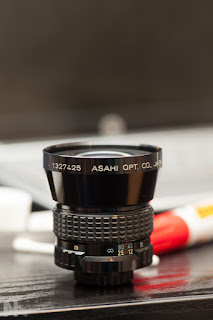 In fact, the only screws that I could possibly see were the three extremely tiny ones in the middle of the lens, just under the rubber ring, but I dismissed them because it didn't seem like good idea to disassemble the whole thing and get to the rear element from the other end.

Well, those were actually the only screws in this lens and they held the whole thing together. The mechanical construction is very simple, especially that there is no aperture diaphragm mechanism or anything. Just two groups of beautiful glass screwed into each other for focusing.

To begin the disassembly, you need to first remove the three very tiny screws hidden under the rubber ring. 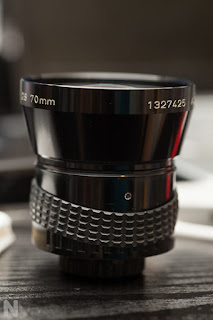 That's it. You're done. Unscrew the whole lens into its two main parts. Basically you have the cone-shaped front group, and the rear group is screwed into the rear mount from the inside. The ring with distance-markings functions as a limiter so you don't turn beyond infinity or closer than 1.5m (this lens's closes focusing distance) and also prevents you from disassembling it when the small three screws are in place. You should end up with this: 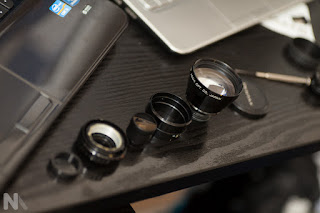 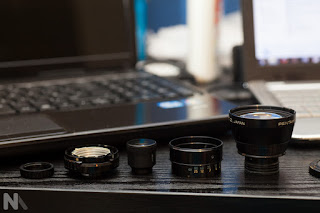 Because I'm after the rear-most element, I'll need to attack this part to the right: 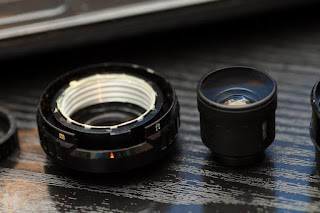 The rear element is held in place with a retaining ring that is screwed in place. I still could not tell whether it's glued or just a bitch to turn, but I used the minutest amount of WD-40 on the sides away from the glass making sure the amount is less than to run anywhere anyway. I waited until the next morning and.... nothing. Still wont turn. 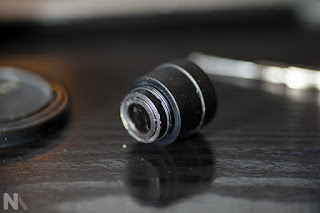 Trying to turn it with my two bare fingers didn't help. I heard these retaining rings are usually so thin that when you press them with your finger you can deform them ever so slightly, enough for them to resist turning. The only solution is to span or turn from many different points on the periphery at the same time. I decided to use a whiteboard marker's cap because the size was right, and I simply cut some electrical tape to add thickness and grip to the ring.

With a couple layers of tape, however, my fingers were able to turn to thing out of place without the need for the cap, and so I could finally access the rear element. 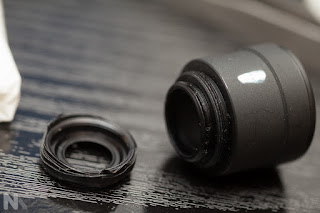 You should be able to see the couple of layers of black electrical tape that helped me span this thing out of place. 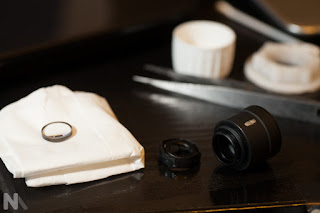 Here's the rear element. As you can see it is made up of two glass elements cemented together. All the more reason for you to be extremely careful and not to get anything like WD-40 anywhere near this thing. 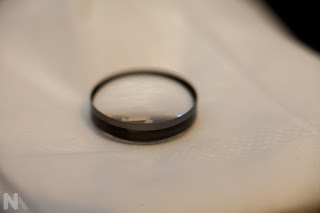 I cleaned the element, the retaining ring, and where it's supposed to go in the rear group, put it all back together and the lens was back as new (aside from a mark I caused when I first tried to turn the rear ring without disassembling the lens... needless to say, not a good idea).

And here is my Pentax 70mm f2.8 on my DiY-gripped EOS-M using my own DiY P110-to-EOSm adapter. Covers the whole frame and produces beautiful pictures. 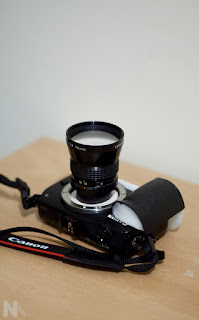 Please share your thoughts or let me know if this was of any help to you.